The countdown to the 109th edition of the Grey Cup is officially underway, and Regina’s iconic Hill Centre Towers in Downtown Regina now have their game faces on thanks to a massive art installation on the building’s slopes.

In partnership with the Saskatchewan Roughriders and the 2022 Grey Cup Committee, Harvard was proud to commission a massive 10,000 sq. ft mural wrap on the iconic Hill Centre Towers I & II that will serve as a symbol of CFL pride and excitement for this year’s festival.

“It’s no secret that Harvard has its fair share of Rider Pride and CFL fandom,” says Victoria Gabel, Senior Property Manager with Harvard Developments. “So, while hosting the Grey Cup means a lot to the province and is exciting for the City of Regina; having the largest Grey Cup Festival welcome sign in Saskatchewan means a lot to us at Harvard Developments. We couldn’t be happier for the opportunity to show off the Hill Centre Towers and the excellent work done by Sleek Signs to the rest of the country during Grey Cup week!”

The 2022 Grey Cup Festival runs from November 15-20 at the REAL District with the theme of “Bring it to the Heartland”. The 5-day event will feature live music, fan zones, player-led youth football programs, tailgate parties, and live e-Sports tournaments, bringing thousands of CFL fans to Saskatchewan.

For a full list of events and a map of the Grey Cup Festival grounds, visit greycupfestival.ca. 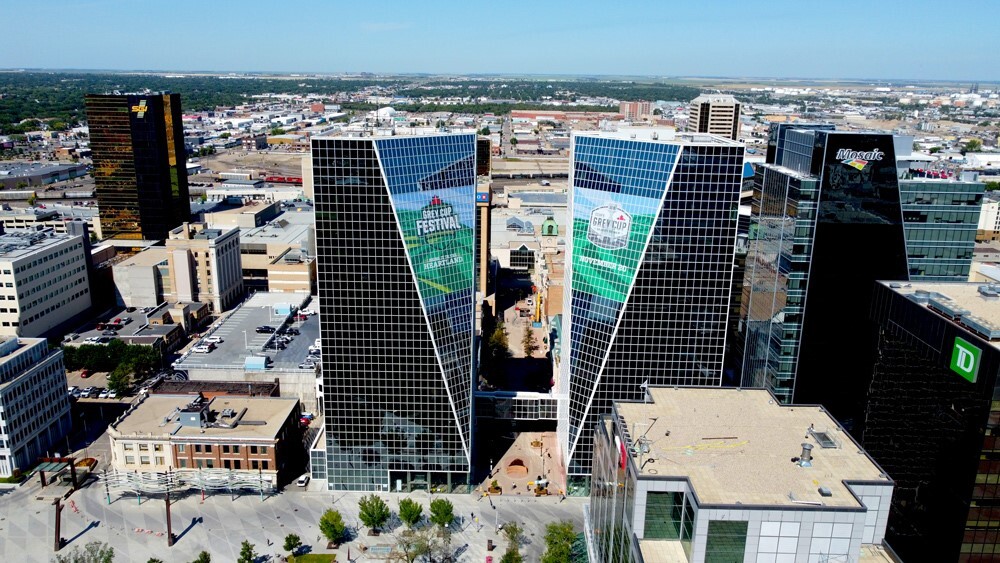